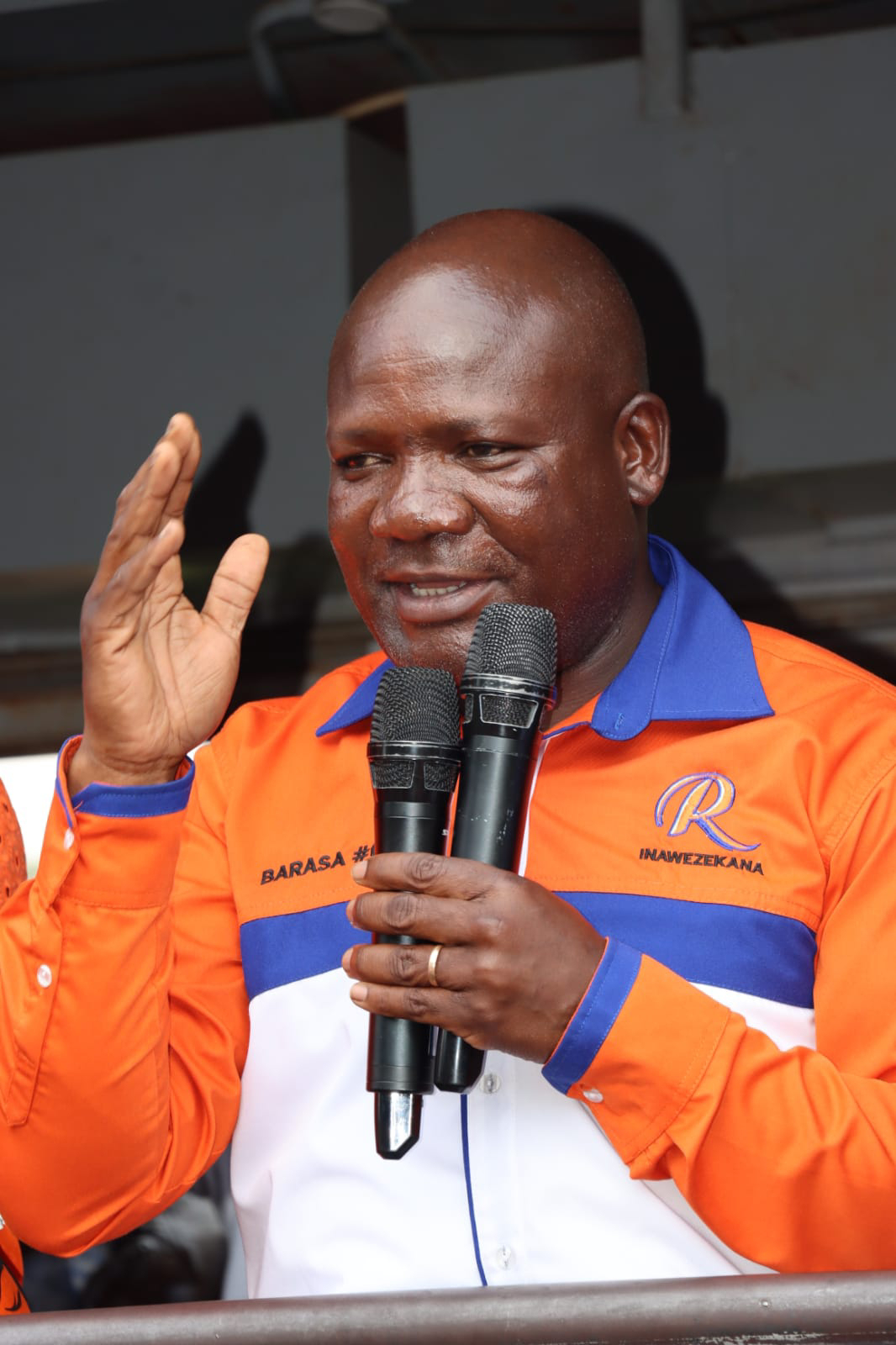 HOW OUTSIDERS CALL SHOTS IN TEAM BARASA. As locals are reduced to abusing people on social media with meagre rewards. As if he is the only Wanga candidate on the ballot, Fernandes Barasa appears to have no space for other sub tribes in Kakamega. The Kabras, the Maramas, the Isukha the Tiriki can go to hell.  Even the Maramas from where Oparanya, the project owner comes from, those supporting Barasa have been relegated to watsapp attack dogs with nothing tangible in the team.  Azimio candidate Fernandes Barasa and his running mate Ayub Savula. Other subtribes in Kakamega have been reduced to cheering A closer look at the supposed government is enough to complete the Narrative that Lower Kakamega have an evil plot on the road to August against the rest of the county.  1. Transport Fernandez Barasa has  a transport manager by Name Hamisi who is a wanga from matungu who has been recruiting all drivers from wanga community only. The only driver who is not a wanga is a driver who drivers Noah which carries security team.  All the vehicles which have been donated are taken to matungu
Post a Comment
Read more 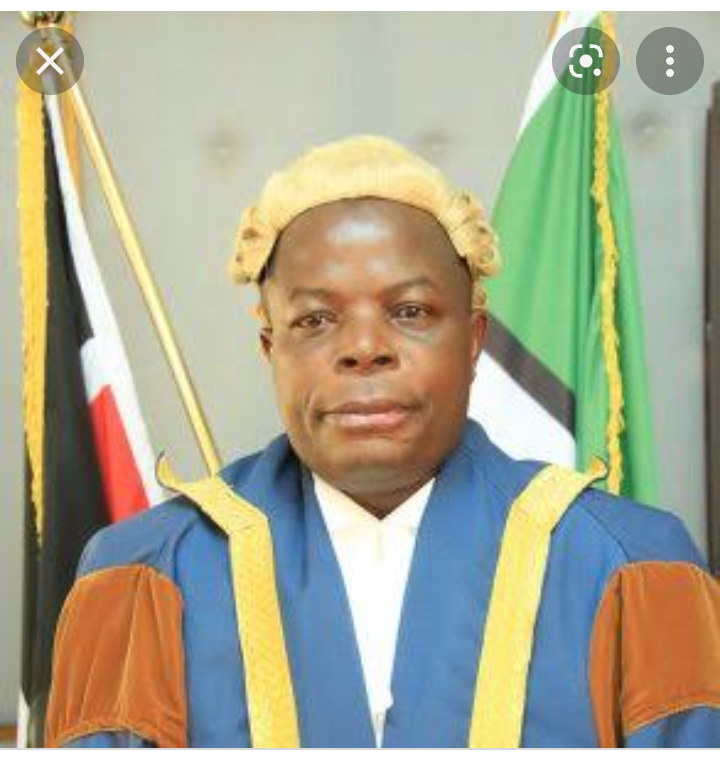 PAST GHOSTS appear to be resurrecting to haunt Kakamega Speaker Moris Buluma in his desperate bid at Matungu parliamentary race.  At this rate the Independent contestant could find himself in hot water if letters from the Auditor General and EACC are anything to go by. An Exclusive report by Kakamega County Assembly that formed the basis of the impeachment of disgraced Speaker Morris Buluma has leaked.  The report by a 30 member committee gives a blow by blow account of said sins that the Speaker meted on the Assembly.  The Ad-hoc committee chaired by Nominated MCA Phaustine Werimo put together a water tight case that could attract the EACC and DPP officers if pursued to the later.  The report in the possession of @eshikumo2030 shows that close to 10 witnesses were called with tons of evidencial documents presented. The chargesheet says Mr. Buluma, as the chairman Service board failed to ensure that statutory deductions were remitted thereby resultin
Post a Comment
Read more 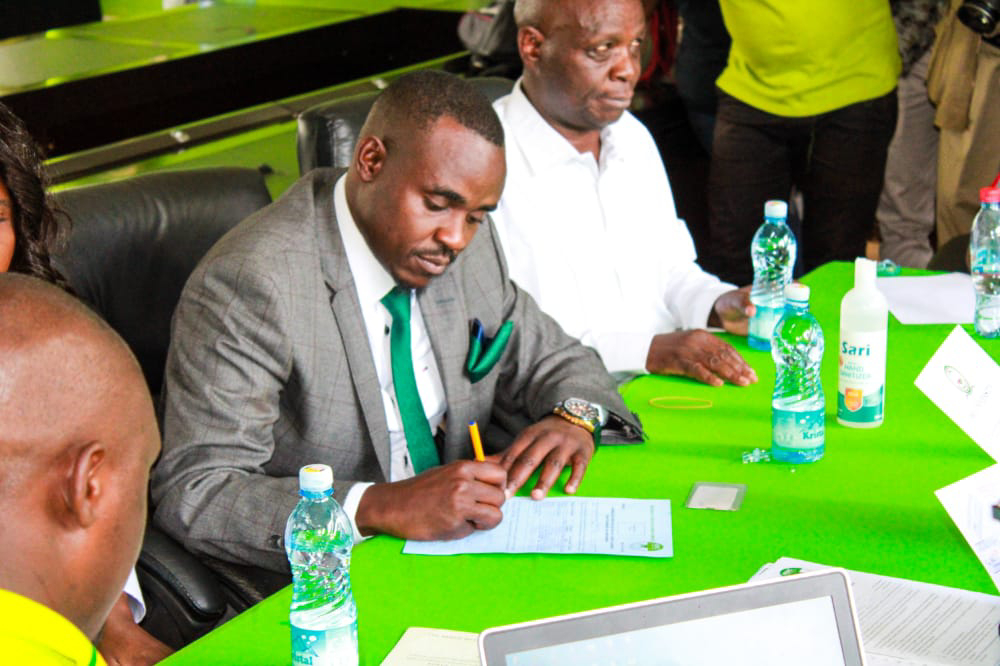 By Joel Eshikumo.  KAKAMEGA SENATOR Hon Cleophas Malala has this afternoon been cleared to contest as the second Governor of Kakamega County.  Despite spanners in terms of concocted Court cases about his alleged lack of a degree being thrown his way, finally the IEBC has given him a green light and a clean bill in terms of academics.  If the energy and the team work we have seen in Kenya Kwanza Coalition in Kakamega at the past is anything to go by, then Malalah's clearance is a nightmare that has come back to haunt Outgoing Governor Oparanya and his project Fernandes Barasa.  It has now come out clearly that an attempt to kick Hon Malala out of the race was cooked at Oparanya's village Mabole and solidified at a Barasa's Harambee home.  The plan was to obtain orders from court barring the IEBC from clearing the Senator so that Barasa, Oparanya's project can have an easy ride to the helm of the county.  No wonder, unlike Malala who has campaigned
Post a Comment
Read more 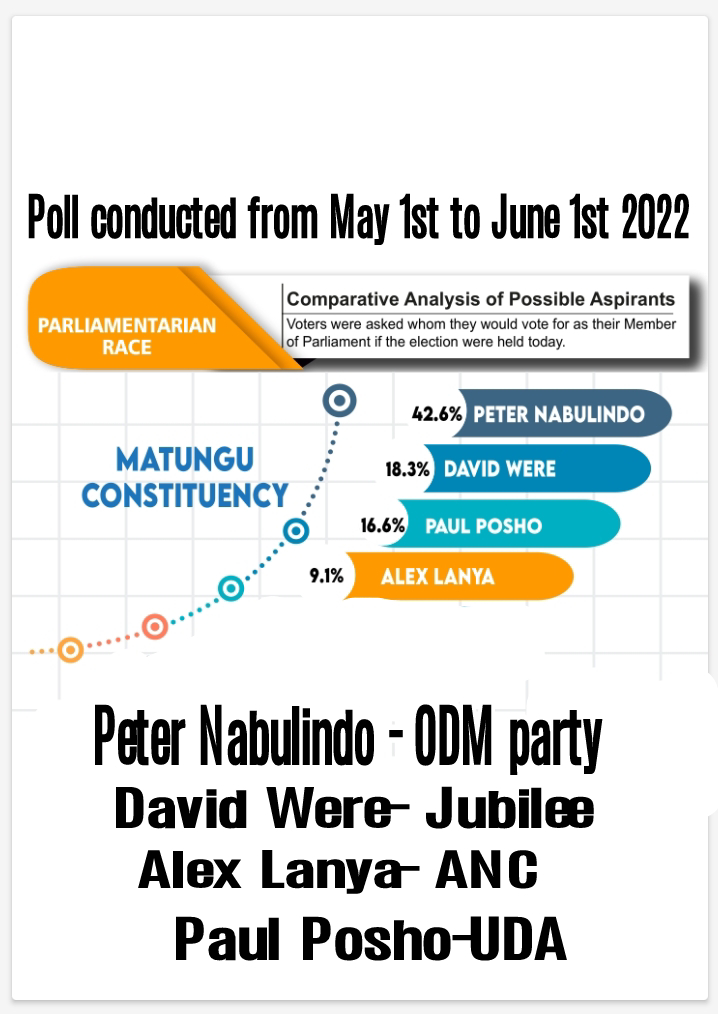 BOLSTERED by his record the last 7 months as MP, Matungu's Honourable Peter Nabulindo is dwarphing his opponents in New opinion poll.  Honourable Nabulindo who was elected at a by election after the demise of Justus Omurunga appears to enjoy a conformable lead at the top despite acrimoniously switching partys.  Entourage of Honourable Nabulindo headed to Matungu IEBC office for clearence.  Opinion polls are today, two months to elections predicting another win for the lagislator in August. As comparisons start flying. 1. David Were never empowered youth, Nabulindo has employed youths as 90% of his office are those below 35  years. 2. David Were awarded tenders and contracts to his friends who turned incompetent, Nabulindo awards tenders through serious panel that interviews applicants. 3. Under Were there was insecurity cases, Hon. Nabulindo has solved this through electrification of streets and market lighting. 4. Infrastructure was poor under Were, Hon.
Post a Comment
Read more

KAKAMEGA. WHY BARASA FEARS MALALA ON THE BALLOT. 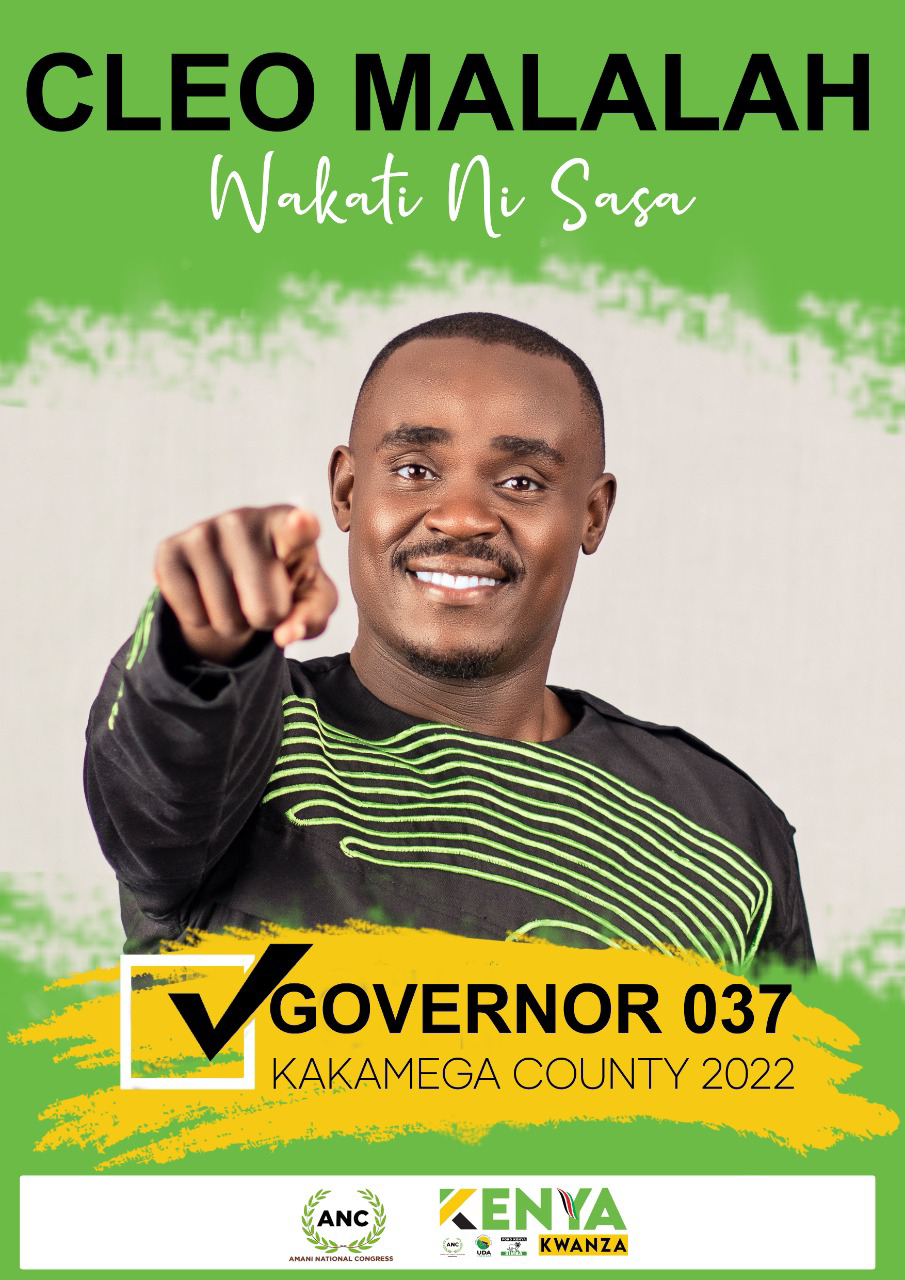 LETTER BY MUSA EKAYA Barasa, a former ketraco MD is seeking to replace Oparanya as Kakamega County.  His journey is full of mistrust, betrayals and shortcuts. Barasa came and edged out Kutima from Odm,he even made sure Kutima never see odm certificate.  Barasa then shifted to Kizito. After using Kizito to eliminate Kutima, Barasa ensured Kizito suffers a blow in ODM. Barasa then went for Imbogo and thrushed him in a deal that saw Imbogo lose some millions.  Mugabe was the next culprit. After sponsoring Barasa lauching ceremony, he was shown the door . Savula was next on line.  He was cheated and offered 50M in a deal that saw him lose DAP ticket and accepted to be Barasa's DG. Savula was promised half of Kakamega County government. As at now,reality is now sinking into Savula what  is now regretting . The 50M is pending, Savula is not in control of campaigns and he is forced to follow Barasa like a lost sheep. Savula is technically out of Kakamega politics.
Post a Comment
Read more 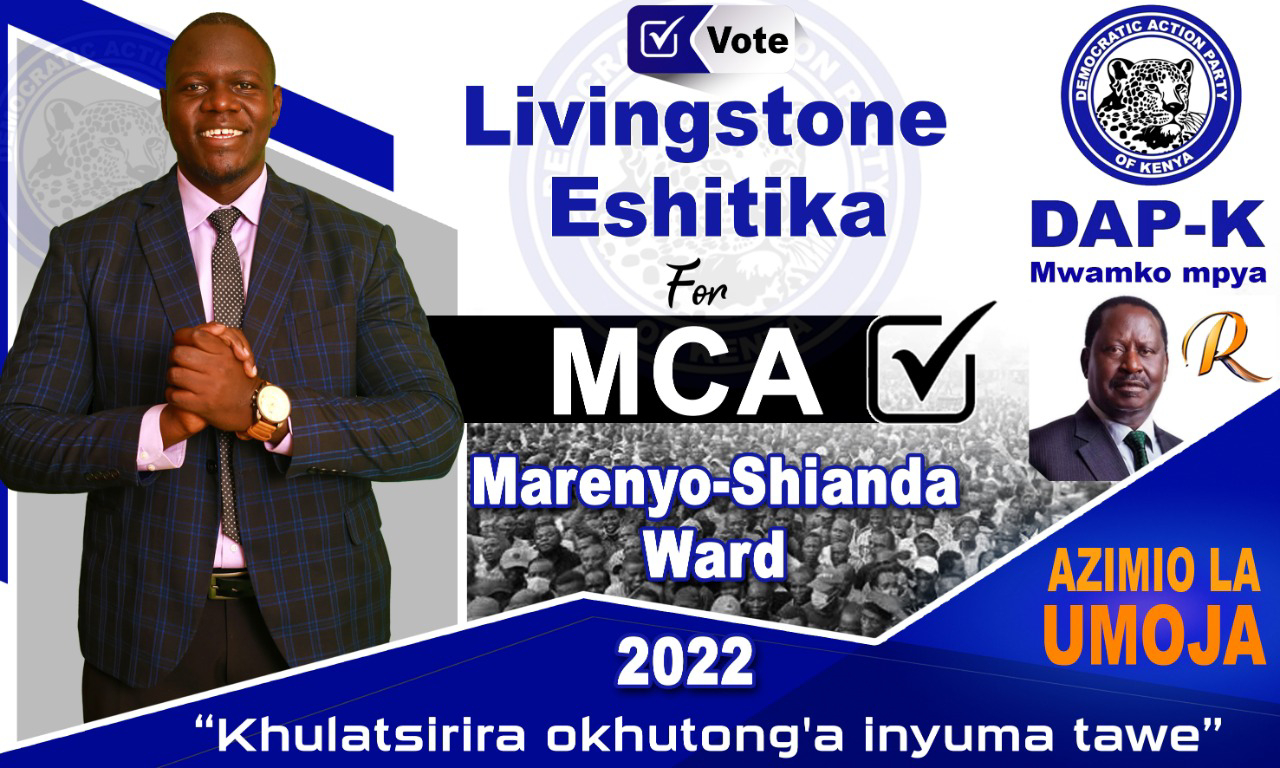 BY SAMSON Okwomi.  An MCA candidate for Marenyo Shianda Livingston Eshitikha is nursing a leg injury after a stampede at a funeral in Butere The DAP-k candidate got the injury as he attempted to run away from mourners who had mobbed him for money.  According to an eye witness who narrated to eshikumo2030, the Incident occurred in Bubala area emahongoyo at the funeral of one Rasto Anjia.  Mr Eshitikha had attempted to give mourners money but the cash ran out and he had to be rescued from irate youths who were baying for his blood. At one point, the youths had heckled the candidate when he was addressing the mourners accusing him of being a project by the outgoing Governor Whycliffe Oparanya 's wife Priscilla. Intervention of the provincial administrators and the church for the youths to calm down were futile as they bayed for his blood.  Mr. Eshitikha, a former Personal Assistant to a county minister Mr. Lutomia who is also his uncle, is accused of being part of those w
Post a Comment
Read more
More posts